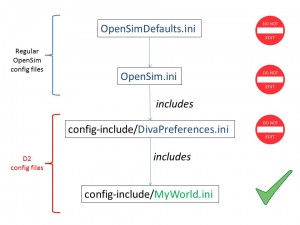 Last week I packaged a release of the Diva Distribution (D2) for OpenSimulator 0.7.4. I’m glad to see that D2 continues to be very popular. Not just there’s already a large number of downloads, but other distributions such as sim-on-a stick also continue build on it. D2 is very easy to install because of the Configuration tool that comes with it. It’s also very easy to keep up-to-date because of the Update tool that is included.

Nevertheless, medium-to-advanced users of D2 often want to change a thing or two from what comes in the package. One thing that I often hear is people not wanting to use mega-regions and, instead, wanting to use plain regions. Another thing I often hear is wanting to add more regions. These are all perfectly good things to do with your D2 installation. However, there’s the wrong way and the right way of changing the default configurations. If you change them the wrong way, things may work fine for a while, but they may break in the next update. This post explains the right way of changing the D2 configurations.

First of all, let me explain how the D2 configuration is designed. D2 uses a hierarchy of configuration files, each possibly overwriting  configuration variables defined in the parent. The hierarchy is shown in the picture on top of this post: the first config file is OpenSimDefaults.ini, the second is OpenSim.ini, the third is DivaPreferences.ini and the forth, and last, is MyWorld.ini. OpenSimDefaults.ini and OpenSim.ini are the regular OpenSim configuration files; the other two are specific to D2. DivaPreferences, as the name says, contains my preferences. If you look in there, there are several modules and connectors that you really don’t want to mess with; it also contains some of my preferences, such as mega-regions (CombineContiguousRegions=true) and permissions. MyWorld, as the name says, contains the configuration variables that are specific to your world — things like URLs, names, etc. But it can have much more.

Suppose you want to use normal regions instead of mega-regions. That is established by the variable CombineContiguousRegions in the [Startup] section. If you look carefully, that variable is first defined in OpenSimDefaults.ini as false (so, no mega-regions). OpenSim.ini uses that default. DivaPreferences.ini, however, overwrites it to true (so, mega-regions are on). If you want to set it back to false, edit your MyWorld.ini and add that variable like this

Reboot your world, and the change will take effect. (WARNING: if you have been building on the default mega-region of D2, I strongly advise you not to make this particular change, because your buildings in all but the SW region will become phantom)

You can do the same for just about any configuration variable you may want to change! — physics, voice, etc. If the section doesn’t exist in MyWorld.ini, simply add it there.

Why MyWorld.ini and not the other configuration files? Because the next time you update your D2 installation, the new package will bring along new OpenSimDefaults.ini, OpenSim.ini and DivaPreferences.ini files that reflect eventual changes to configurations in OpenSim; the changes you made in those files will not be carried along to the new installation. Of all the 4 configuration files depicted in the picture above, the only one that is preserved between updates is your MyWorld.ini file.

I hope this clarifies things! And happy Virtual-Worlding!

2 replies on “How to Change the Default Diva Configurations”